Who are we and how did we get here?

Harpenden and Wheathampstead District is lucky to have many Scouts and, as at October 2022, we had 10 Scout Groups and 6 Explorer Units. Many of the Groups have more than one Cub Pack or Scout Troop so we have a huge pool of young talent eager to join the cast of one of the UK's, if not the world's, top Scout Gang Shows. We are often oversubscribed so we usually have a waiting list!

Although Glasgow Gang Show started in 1936, Harpenden Gang Show is the longest continuously running Gang Show in the world, having had a continuous run every year since 1949, except for when the Covid pandemic forced the 72nd Show to be postponed to 2022. We were very lucky to be able to hold our 71st Show in January 2020 before the Covid pandemic forced a first national lockdown. Before then, even a severed electricity cable didn't stop the Show in 1974. Parents drove their cars onto the steps of the Public Halls and lit the stage with headlights!

The Eric Morecambe Centre in Harpenden has hosted the Gang Show since 2022 and is bigger and better than our old home, the Harpenden Public Halls, which are on the opposite side of the Common. There is still a limit of 152 cast members who can be on stage but the larger Eric Morecambe Centre auditorium can accommodate around 450 people. It has taken place in January for many, many years.

The audience often includes people from far and wide, with members from Scout HQ and other Gang Shows travelling from all over the country to enjoy our Show. The national distance record, previously held by Glasgow and Edinburgh Gang Shows at around 380 miles was shattered by Graham Eden of the Inverness Gang at our Saturday evening show in Jan 2014 who travelled 540 miles by plane, train and car to the Show. The international record is held by Brisbane Gang Show at around 10,300 miles! Ewan Murray, our Producer, has the boomerang to prove it too.

Whether you are a Scout or not, you will always be welcome to join us, wherever you are from. At the Show, you will be greeted in the foyer by our friendly Front of House team and Explorer Scouts. Come and be part of the 3,000 audience members that enjoy seeing our Show every year.

Since our first Show in 1949 there has never been an audition to become a cast member and there is a very strong feeling that this should remain. If Scouts want to be in the Show, then they should have the opportunity.

When Scouts are accepted into the Gang, they can audition for extra singing, dancing and speaking roles. The Creative Team also chooses the “Dance Team” which is a group of 8 girls and 8 boys who are Explorers.

Since 1994, we have not had anyone on stage over the age of 18, except for the 50th, 60th and 70th Shows when we featured some ex-members including those who appeared in the original 1949 Gang. 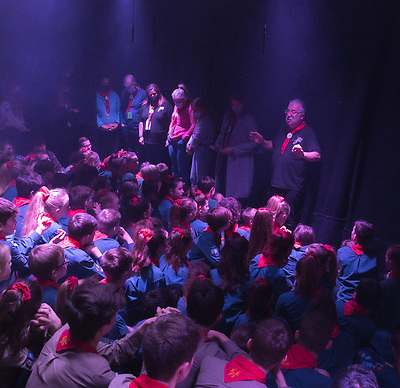 Our backstage crew members include ex-Gang members, and those ex-Gang members often have children in the cast. The 1949 Show had around a dozen enthusiastic adults but today we have more than 150 adult helpers.

Among our crew we do have people that have either professional or semi-professional skills in show production, but most are amateurs with the necessary enthusiasm to put on the Show each year. We encourage young ex-Gang members to join in and they can be found backstage learning the ropes, helping with technical equipment, wardrobe and so on.

We hope you enjoy our Show!

(Harpenden and Wheathampstead District Scout Council is a charity registered with the Charity Commission, charity number 302531.)